How quickly time flies, did not have time to settle by the sea, as my coastal trip came to an end. 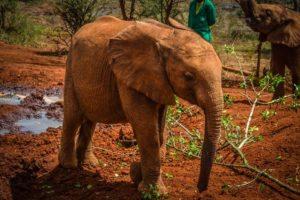 Business called me back to Nairobi, and while much remains to be seen, I was positive that the undisclosed secrets would remain an additional incentive for me to re-visit the coast.

The flight from Malindi to Nairobi takes only 1 hour, it seemed we barely had time to take off, as the plane has already started to decline, preparing for landing.

Nairobi met me with heat and noise, having joined the General stream, very soon begins to seem that you and at all anywhere from here did not leave.

Today I had planned a trip to the shelter of David Sheldrick, and since it is open for visits only in the morning, and sometimes even 1 hour from 11-12 am, I decided to go there immediately, without stopping at home.

Sheldrick shelter is a unique place where there is a rehabilitation center for orphaned elephants and rhinos whose parents were killed or died for any other reason.

They are rescued and brought here not only from different parts of Kenya, but also from other countries. Babies are nursed until they are ready for independent living in the wild, usually in one of Kenya’s national parks.

I had time for the opening, and together with the rest went to the empty fenced area, where I saw huge bottles with nipples and a few people from the staff.

I looked around for Pets, but I didn’t see a single elephant on the horizon. 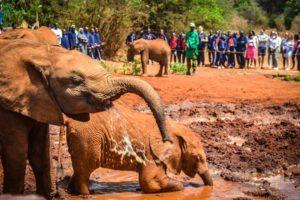 The wait lasted 5 minutes, and from the forest began to appear baby elephants, the first, the smallest, they are not used to live as a family and they were taken in small groups.

Funny and clumsy, they ran briskly towards the bottles, lifting the trunk and opening his mouth, showing employees how they were hungry.

I noticed that not all elephants are ready to eat from human hands, some, brought recently, are not used to live without a mother, and especially for them, was built rag canopy, replacing them with an elephant, from under which peeked bottles with a mixture.

More recently, these kids had tight, their body did not perceive the milk of Pets and many of them died. However, now, the center has developed a special mixture, which was taken as a basis for baby food for people, and the situation has improved markedly. 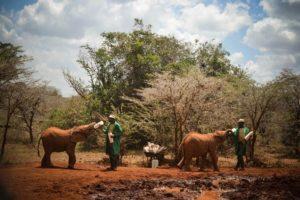 After eating, the kids begin to actively communicate with people, and I was able to scratch and stroke their hairy fur, carefully covered with blankets to elephants are not burned in the sun.

After playing, they obediently go back with the staff representatives, which, I thought, perceive for parents, giving place to the next more senior group.

The second group of adolescents, they are more independent and active, almost all are already eating leaves and drinking water, and then gladly take mud baths.

They have fun playing with each other, and sometimes fighting, taking other people’s food or proving his prewashed Sheldrake, Russian guide Kaniadto.

They also make contact with people, openly and trustfully, as well as their younger brothers.

Looking at them, I do not want to believe that every kid from the shelter has experienced in his life the tragedy of losing his family, and everyone has a sad story.

I would love to talk more with these nice and positive animals, but this, unfortunately, is prohibited by the rules of the shelter, because elephants should not get used to people, staying wild, so that in the future, they could normally exist in nature.

For the same reason, the staff is dressed in the same uniform, so that the kids do not get attached to someone one, and perceived all the same, getting used to live in a big family, which they will soon find in the wild. 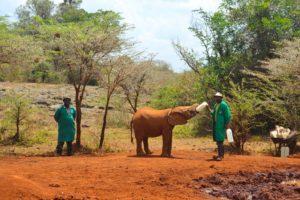 Going home, I was thinking about what I saw, I was very impressed by everything that I not only saw, but also felt, being in direct contact with these incredible animals.

I thought about how wonderful people were David and Daphne Sheldrick, this famous naturalist, the founder of the East Tsavo national Park, and his wife, who founded it in 1977.

Wildlife Fund and orphanage for orphaned elephants: they were engaged in a beautiful and noble cause, without expecting anything in return, having spent on it, nevertheless, and the most part of the life!