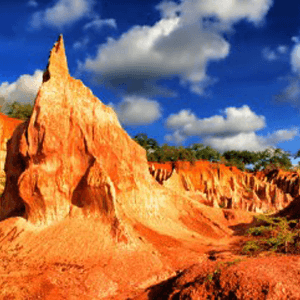 During the day, excursions are not held, as the temperature at noon reaches 50 degrees.

The geological explanation of the amazing rock formation is that the canyon consists of layers of mixed rocks, some hard, some soft.

Once it was a huge Sandstone ridge, worn by wind, rains and floods in a series of rugged gorges.

The color of the layered Sandstone pie reveals white, pink, orange and dark red, making the gorge particularly bright at sunset when the tones of the ribbed Sandstone ravines stand out and reflect off the shades of the setting sun.

The beginning of the tour approximately 2 hours of day.

The cost of the tour includes:

Meeting and seeing off at the hotel